6 Things Not To Say To A Divorcee 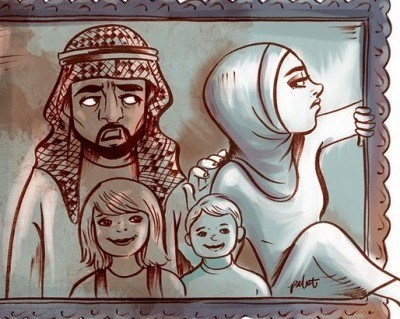 Courtesy of www.suhaibwebb.com. The following article titled “6 Things Not to Say to a Divorcee” by Amal Killawi and Zarinah Nadir is a good list of how to talk to someone recently divorced. The author’s audience is mainly Muslim, but their advice applies to all cultures. Society tends to treat divorced persons as if they have somehow failed in life. Divorce is not a sign of failure, but rather a person’s willingness to actively improve themselves. Try to think about the following article the next time you speak to a divorced friend or acquaintance.

But it’s the reality for 50% of American couples and 31% of American Muslim couples. With these statistics, you’re likely to have friends or know people in your community who have been divorced or are currently experiencing a divorce.

Divorce is often a time of monumental hardship and change. Many people do not know how to convey their sentiments when learning about a divorce. Comments are usually well-intentioned but can be grossly misplaced. In honor of our brothers and sisters who have experienced marriage dissolution or are currently in the process, we present a list of the top 6 things not to say to a divorcee. These statements are based on real-life experiences shared with us.

Unless this question is posed by close family and friends or persons involved in the mediation process, it is highly inappropriate, offensive, and intrusive. If people were unsure of their decision, they would not have shared the news with others. Additionally, for some people, divorce may not have been their choice or decision to make. People are likely to be under a great deal of emotional stress, and asking them about the uncertainty of their decision is disrespectful of their journey before separation.

2. “How long were you married?” And upon finding out it was a relatively short period – “Oh, well, at least it was short.”

Marriage duration is not an accurate indicator of the value of the relationship, the length of the healing process, or the legitimacy of the marital experience. Whether the marriage lasted for 5 months or 5 years, it is important to acknowledge the significance of this loss. The end of a marriage often also symbolizes the end of the dreams, aspirations, and life plans of the couple. Additionally, it is important to realize that regardless of the duration, some people may have suffered through distressing trials in their marriage. The last few months could have been a living nightmare.

Since when has “I told you so” ever been a sensitive comment? Unfortunately, some people use these opportunities to reveal their intuitiveness about a person’s marital problems. Although they may consider it to be a statement of reassurance – that one should not be upset because the relationship seemed destined for divorce anyways – it is just plain rude and insensitive.

4. “Who filed for divorce? Did you go to court? What did you get? Who has custody?”

For Muslims in the United States, divorce is often both a civil and religious process. These processes can be lengthy and draining emotionally and financially. Practice caution when asking questions about the divorce process. Take the lead from the divorcee before entering into a conversation. If the person doesn’t share, don’t probe. These are personal questions and may still be contentious.

5. “But you were such a perfect couple!”

Or any variation of this such as, “But he is such a nice brother!” or “She’s such a religious sistermasha’Allah!” There’s no such thing as a perfect couple or a perfect person. It is important to remember that people’s public personas can be very different behind closed doors. No matter how well we think we know others, there is nothing comparable to living with another person in a marital relationship. Statements that pass judgment should be avoided because the reality is we do not know.

Not everyone who has experienced a divorce appreciates a du`a’ (prayer) for a speedy remarriage. While prayers are important for a person going through hardship, keep in mind that certain prayers expressed during this time may not always be appropriate. Some people do not wish to re-marry for some time. Additionally, some divorces are as a result of traumatic experiences such as domestic abuse or infidelity, and divorcees may very well be fearful of re-experiencing this trauma in a future marriage. It’s better to focus your du`a’ on helping them to adjust and move on, instead of praying for another marriage!

So then, what is appropriate etiquette to talk to a Divorcee?

Remember, you may encounter someone at any stage in that process. By practicing sincerity and utilizing common courtesy, we can be more mindful in our interactions with people undergoing a time of reflection and change.